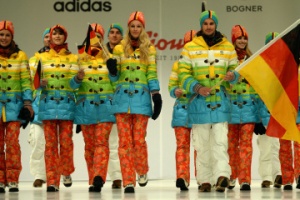 This is what the Olympic uniforms of the German team look like for the upcoming summer 2014 games in Russia.

Besides being the most fashionable thing on the planet, they seem pretty defiant considering all the hub bub around Russia’s anti-gay legacy that President Vladimir Putin has been creating in recent months. (P.S. the gay-hating ruler has just been nominated for a Nobel Peace Prize by a group that credits him with finding a peaceful resolution to the Syrian-U.S. conflict….what).

Olympic officials for team Germany say that the uniforms have nothing to do with the recent events in Russia, which include Putin’s essential ban on gays and the new law that bans “propaganda of non-traditional sexual relations.”

“This is just a fashionable jacket,” said Michael Vesper, a German Olympic official.