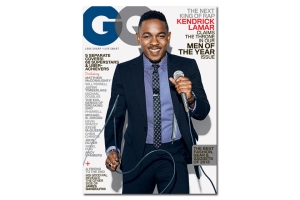 As part of GQ’s Men of the Year issue, the publication named Compton-native, Kendrick Lamar, rapper of the year.

They then proceeded to use racial overtones in the feature, prompting Lamar’s team to pull his performance from GQ’s Man of the Year party last Tuesday.

GQ is now utterly mystified as to why this all went down.

We’re pretty sure we pin-pointed the exact paragraph that Lamar and his label, Top Dawg Entertainment, have a problem with.

“Much of Kendrick’s music now is an attempt to transcend his ravaged world without separating himself from it in judgment, about somehow gaining control over his household’s chaos—some of his uncles were Crips, and his father was reportedly a Gangster Disciple in Chicago before moving to Compton—and over his neighborhood’s warped commitment to adolescent pride. It’s an ethos that extends to his crew. They have a seriousness of purpose, a rigorous discipline that can feel slightly monastic at times. Kendrick doesn’t smoke weed or drink booze. In the time I spent with him, I never witnessed anyone roll even the thinnest spider leg of a jay, nor did I see Kendrick so much as glance at the many, many girls around him. “When I ask OGs why there’s so much division in the streets—nobody never really knows,” he says. ‘But you know one thing that everybody always mention? A woman.‘”

Let’s not forget to mention the fact that GQ journalist Steve Marsh compared the head of TDE, Anthony “Top Dawg” Tiffith, to Suge Knight, CEO of Death Row Records who has been implicated in both the murders of Tupac Shakur and Biggie Smalls. Marsh in effect compared the head of a new label to that of a murder suspect, which also brought back the entire legacy of real violence that rap and hip-hop became associated with in the early 90’s.

Way to go, GQ and Steve Marsh. You reinforced stereotypes found in the rap game without even trying, and once you did you refused to acknowledge it; your lack of apology is a clear indicator of your ignorance to race issues in American rap music.

Neil Hilborn Tells Being Bipolar Like it Is »
« What Will it Take for George Zimmerman to Actually go to Jail?